You Win in the Locker Room First: A Narwhal Book Review 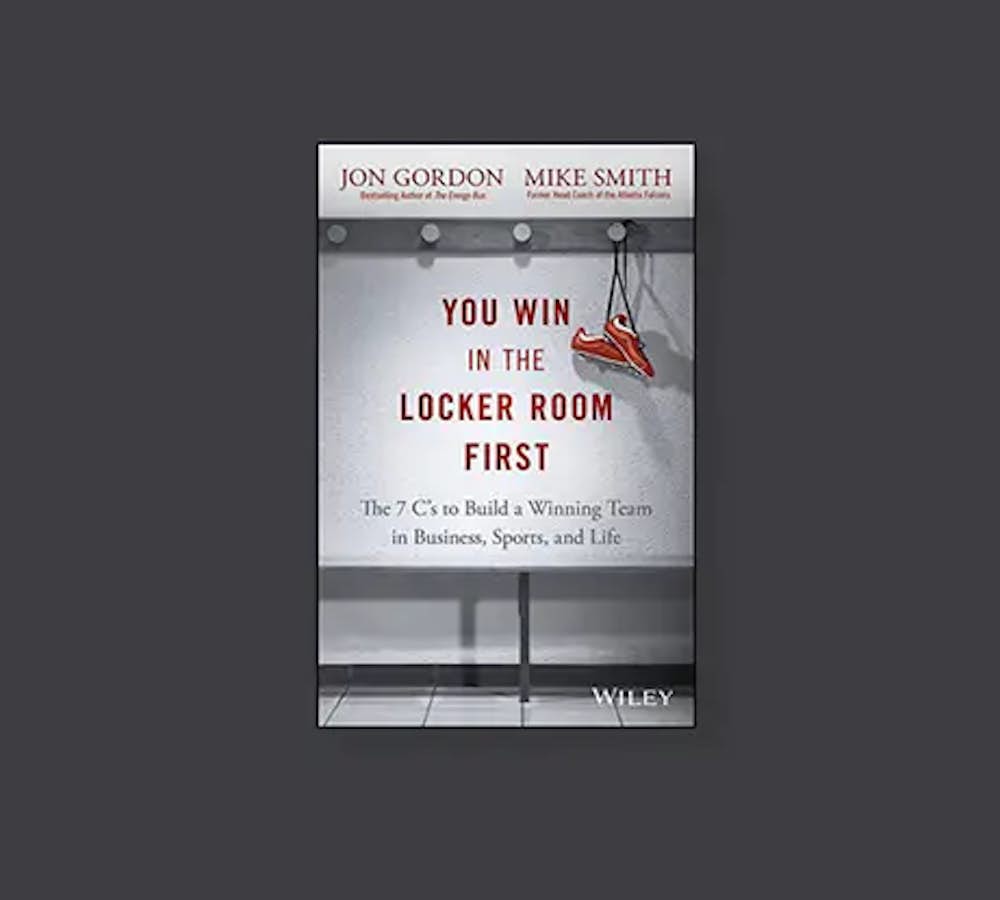 This month, the client service committee read ‘You Win in the Locker Room First’. This book is a collaborative work between author and motivational speaker Jon Gordon and former head coach of the Atlanta Falcons Mike Smith. The book is unique in its structure in that it is a collection of short stories and antidotes from Smith and Gordon on a number of different topics centered around the theme of leadership. The two writers offer different perspectives that add depth to the book, with Gordon drawing on his interactions with business leaders through speaking engagements and Smith providing commentary based predominantly on his seven years as the head coach of the Falcons. The structure and the mix of these unique perspectives makes the book an easy and entertaining read on what the focus of a great leader should be.

This book was intriguing to me because I have always been fascinated by leadership and think it is critical to continually hone your leadership skills. I see this as such an important practice because I am under the impression that, while not everyone is a leader by job title, everyone is inevitably leading someone in one way or another. If it is the case that someone is always looking to you for leadership, it is a valuable practice to invest in your ability to lead effectively, and this book certainly provided some practical concepts to do just that.

A specific theme from the book that I appreciated was the idea of optimism and its importance in the realm of leadership. A quote from Mike Smith read, “the world trains people to be pessimistic, but my job is to help people believe that tomorrow will be better.” Smith harps on the importance of the idea of keeping individuals optimistic about what is to come in order to keep them bought in and engaged. Engagement from optimistic individuals goes a long way in creating a healthy culture. This is not an easy concept, because, in the world of professional sports (and just about any other profession) it would be unrealistic to ignore any sort of mishap and believe that everything was perfect all the time, that wouldn’t be genuine. Smith had a phrase that he used to address this concern that I enjoyed so much that I am trying to adopt it myself. Smith repeated the phrase “never a bad day, only bad moments” constantly to his teams. This mantra allowed players and coaches to express frustration for the negative moments that arose throughout the day, but those frustrations were not allowed to outweigh the positive moments that were experienced. The goal at the end of the day was to have more good moments than bad, so that each day could be viewed as a net positive, which is a healthy and realistic way to keep a positive mindset.

Another concept that both authors stressed as a critical aspect of leadership is the importance of focusing on the process and not the results. Mike Smith cited adherence to this principle as one of the keys to his success early on as the Falcons head coach, and the lack of focus on this principle in his later years as what ultimately led to his termination. Smith talked about how laser focused every staff member and player was when it came to doing all the little things right each day, and that focus translated into success on the field. In 2012 the Falcons finished with a 13-3 record and were a few plays away from playing in the Super Bowl. The problem was, that taste of success and the near miss of playing for a Super Bowl completely derailed the process-oriented mindset of the team. The team’s focus shifted from how to improve each day to doing everything they could to get to the Super Bowl. It added a level of expectation and pressure that drastically changed how the team operated. The following year, the team struggled to a 4-12 record and the year after Mike Smith was fired. Smith is convinced that this specific failure ultimately led to his firing, which is a powerful realization to make.

While reading this section on the importance of being process oriented, it was interesting to draw parallels to how Narwhal operates, especially with regard to the investment process. Narwhal is very systematic in how we approach investment opportunities. Each time an opportunity surfaces, it is researched and presented to the investment committee in the form of a pitch. This document examines every aspect of a company’s operations, looking at how they stack up relative to their competitors, how much control they have over their suppliers and buyers, the capability of their management team, the macroeconomic trends for their business, and so on, culminating in a 20-30 page research paper that is discussed at length by the investment committee. The insights gleaned from the pitch and discussion process inform assumptions that are inputted into financial models which ultimately guide the buying and selling of securities. This process is often viewed as old school, and it may very well be that, but we are convicted that it gives us the best opportunity to provide consistent and repeatable results and it was encouraging to hear Smith talk about the importance of making attention to detail a foundation for how you operate.

There are countless other insights that this book offers that make it a worthwhile read, and the relatability of the authors and the examples that they use makes it a simple and engaging read all the way through. I would certainly encourage everyone to read this book, but especially those with an interest in leadership and sports. If you would like to read more about ‘You Win in the Locker Room First’ or would like to purchase a copy, click this link.