Trump as an Investment: A Lesson to be Learned 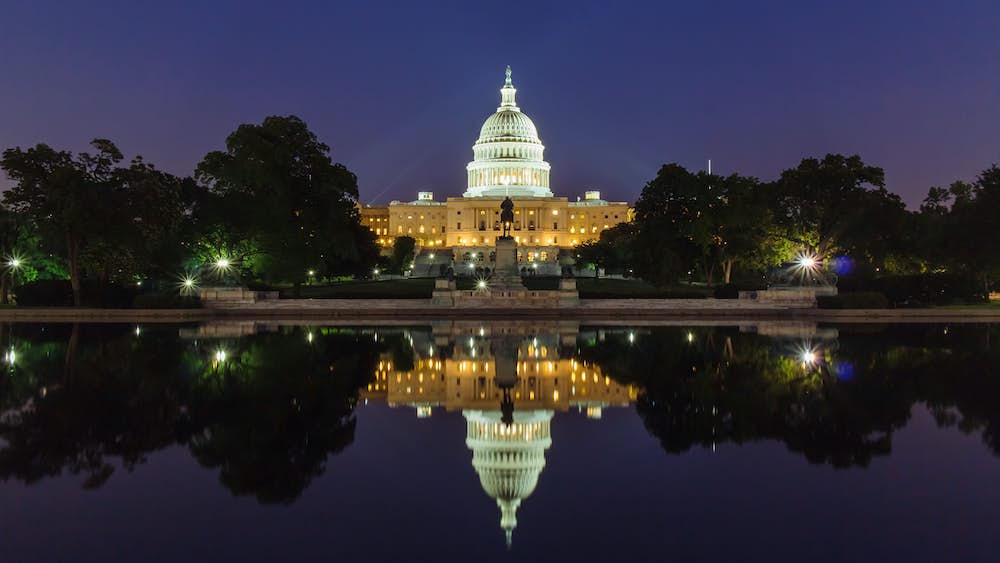 It's hard to process the chaos that occurred in Washington, D.C., yesterday afternoon and even harder to understand how we, as a nation, got to this point. As I remarked to a dear client back in December, I feel like I'm still too young to be asking myself questions like, "What world am I living in?" Last night, I once again found myself asking those types of questions.

I'm not sure if the vile events of January 6, 2021, will go down as an iconic rendering of a nation divided. Will it be a turning point towards progress? Will it be a catalyst forcing further fractions? Will it be an event that we tell our kids about and a rare moment in which we remember exactly what we were doing, who we were meeting with, and what we were saying? Or will it be something we just kinda-sorta remember two months from now? These unknowns in and of themselves are a problem.

But I do think it's a teachable moment, and I hope it's a uniting moment. I was encouraged by the tone of speeches from the Senate floor last night when alleged civil servants returned to session to certify election results and actually act in a way behooving of their elected positions. Save for Josh Hawley of Missouri, who clearly missed the memo that Trump is the villain in this particular narrative, the overwhelming theme was the protection of democracy through a process of over-looking papercuts. As the father to a five-year-old, that is, in fact, one of life's great lessons: how to overcome papercuts. People are hurt. People have scraped knees. People have small complaints. But it's time to turn the page. Even Georgia Senator Kelly Loeffler, someone for whom my dislike has been voiced regularly on our morning market briefings and someone fresh off a defeat in a runoff election, set aside her initial objections to certification and spoke in support of moving forward. She still spoke like a poorly-programmed robot or an intergalactic rendering of a homo sapien, but that's beside the point, and her message was appropriate.

The overwhelming majority of Americans were appalled by what they witnessed yesterday afternoon, and rightfully so. An immediate takeaway should be that outraged Republicans—and here I'm talking about those who were outraged by the events at the Capitol and not those outraged by the election itself—recognize that although they may vote like the criminals who infiltrated the state house, they are not like those people at all. In doing so, perhaps there could be some leniency and understanding that those who destroyed businesses and looted in the summer of 2020 are not representative of all Democrats. Perhaps both parties could recognize that although differing opinions on matters like foreign policy, immigration, healthcare, and taxes are permittable, certain responses to those opinions are completely unacceptable. Maybe some self-policing could replace political meme-making and extremism.

I also think there is an investment-related lesson to be learned from the final weeks and months of the Donald Trump Presidency.

For years, we had a four- or five-page printout taped to the front of our office refrigerator: Signs of a Value Trap. In the world of investing, a "value trap" is a stock that is ostensibly cheap by common metrics (cash flow analysis, pricing ratios, etc.) but is not actually cheap. As most readers and clients know, we like to buy cheap (read: under-valued) stocks and hold them for a period until the market fully appreciates their value. That philosophy, however, requires tremendous diligence to avoid buying companies that are cheap for a reason. The reality is this: Bad companies should not trade at high valuations. Bad companies should be cheap. We want to find cheap companies that are actually good. Therein lies the challenge of our core competency.

The Value Trap warning on the refrigerator was a constant reminder that we need to be on our guard against what seems good but is really not. I'd see it every morning when I grabbed water out of the fridge. At lunchtime, it was there when I grabbed ketchup. A 5:00 beer run would come with a reminder to avoid value traps. As we've grown, expanded our team and our office space, the physical reminder of that list has been lost. We've graduated from one fridge to two, and we even have a mini-fridge so that the young employees next door (who are clearly too coddled and sheltered to walk to the main office for a beverage) can access refreshments. The sheets of paper are gone, but the message is not.

Perhaps the most vital warning on those sheets was a warning against leaders with a savior complex. As investors, we should be wary of CEOs, chairmen, and activist investors who sweep in to save the day. Putting one's faith in their ability to right a misguided ship is ill-advised—it's a value trap.

I was reminded of that notion as I watched what has transpired in the United States over the past few weeks. And perhaps I should have been reminded of this much sooner.

During his "I give up" of a best-man-speech last night, South Carolina Senator Lindsey Graham noted that he still believes Trump was a "consequential president." I think there is merit to that sentiment. He achieved a number of things that would likely make his voters (and in some cases, even his opponents) proud:

That list is not exhaustive, but he accomplished those things relatively quiet because the past four years' real noise came from his Tweeting. His inability to focus on accomplishments rather than spar with his detractors was, in my opinion, an even greater explainer for his 2020 election defeat (and he was defeated) than his handling of COVID.

While he collected successes like those listed above—as well as more partisan victories like appointing conservative judges—the media drew attention to a slew of matches that he himself had lit. Most avid but reasonable Trump supporters would recognize the glimmer of truth and the threat of those matches. They'd say things like, "I don't like what he says, but I like what he's done," or "I just wish he'd be quiet and let his work speak for itself." Deep down, even the staunchest Republicans knew that having lit matches surrounding a collection of valuables was not a great idea, and these matches reflected all the flaws that Trump embodies. There was a match for his ego, a match for the way he brutalizes former allies, a match for his general demeanor, a match for his inability to communicate in a Presidential manner.

But over the past few weeks, Trump has poured gasoline on the very matches he lit. Yesterday, fires ignited and destroyed the collection of "good" things his defenders could point to when excusing his rhetoric, behavior, and nonsense. In doing so, he tarnished his legacy but much more gravely damaged the Union.

Trump, as we can now see clearly, embodied all the warnings of that old Value Trap warning against leaders with a savior complex. He was capable of doing things—meaningful things, unorthodox things, and at times good things. But he couldn't "save" the company that is America. Nobody can.

An old Harvard Business Review article bemoans the "Curse of the Superstar CEO" and offers this poignant assessment on why savior-leaders are doomed to failure:

The misguided assumption that CEOs are all-powerful is the main reason that the tenure of business leaders has grown ever briefer in recent years. If a CEO is responsible for a company's successes, after all, he must also be responsible for its failures. My research clearly shows that directors automatically blame the incumbent CEO when a company performs poorly. Scapegoating is as old as human nature, of course, but my interviews strongly suggest that when corporate performance falters, directors come under enormous pressure to fire the CEO and hire a savior. This finding is consistent with the larger historical truth that while charismatic leaders (whether in religion, politics, or elsewhere) may appear at any time, they most often emerge—or are called into existence—during a crisis.

So here we are, at another crisis (perhaps the first of dozens in 2021, given the lay of the land and an expedited news cycle). President-elect Joe Biden is already being hailed as the hero we deserve. Greg Valliere, a political theorist with an emphasis on the investing landscape, noted in today's morning briefing that Biden is "the perfect antidote," adding:

There's no politician in either party who has what Biden brings — he's soft-spoken, patriotic, and relatively moderate, with a refreshingly modest ego. Biden is far from perfect, but he's the anti-Trump.

I would caution, strongly, against that way of thinking. Will Biden's tone be refreshing? Yes. Will he be different than Trump? Undoubtedly. Will he "save" America? No.

We should be wary of falling into that Value Trap. Doing so will damage the value of our investment in our own nation and set our elected leadership up for demonstrable failure.

Instead, we must do the real leg work to examine the value proposition offered and the outlook for our country. Though he was ruthlessly mocked for sounding like a social studies teacher (or, in other words, sounding like an actual human as opposed to a politician), Nebraska Senator Ben Sasse delivered what I viewed as an optimistic take on the future of America last night. After bemoaning the desecration of the Capitol and the bloodshed of the day, Sasse offered the following:

When we're conducting diligence on investments, striving to avoid value traps, and looking to shun Savior CEOs, we have to look for the beauty. We have to first recognize what's ugly—sales trends, shrinking margins, trouble balance sheets, robust debt maturities, you name it—but we then must identify the true potential of the company in question. We have to push forward to look beyond what currently is to see what could and, hopefully, will be.

Undoubtedly the events of yesterday created concerns in the minds of investors. I've heard from several clients—phone calls, text messages, emails—over the past 24 hours, and I'm very receptive to those concerns. But as we said on the morning briefing call today, we think the ultimate economic impact of what transpired yesterday will be relatively negligible. On the positive economic side, Republicans aren't quite as likely to obstruct future stimulus bills on the grounds of unbridled partisanship. More stimulus money will help consumers and businesses pull out of the depths of COVID. Down the road, this could mean that tax reform is slightly easier to push through.

We don't view the events of yesterday as cataclysmic for investors. We try not to focus on short-term returns, but it is telling that the market (which is very quick to price in potential turmoil) closed up for the day yesterday and is up significantly today. Our plea to clients is to stay disciplined and stay reasonable with long-term objectives superseding short-term fears. That applies not only to their investment portfolio but also their outlook on life in today's America.