Potential Impact of the Election on Investment Portfolios 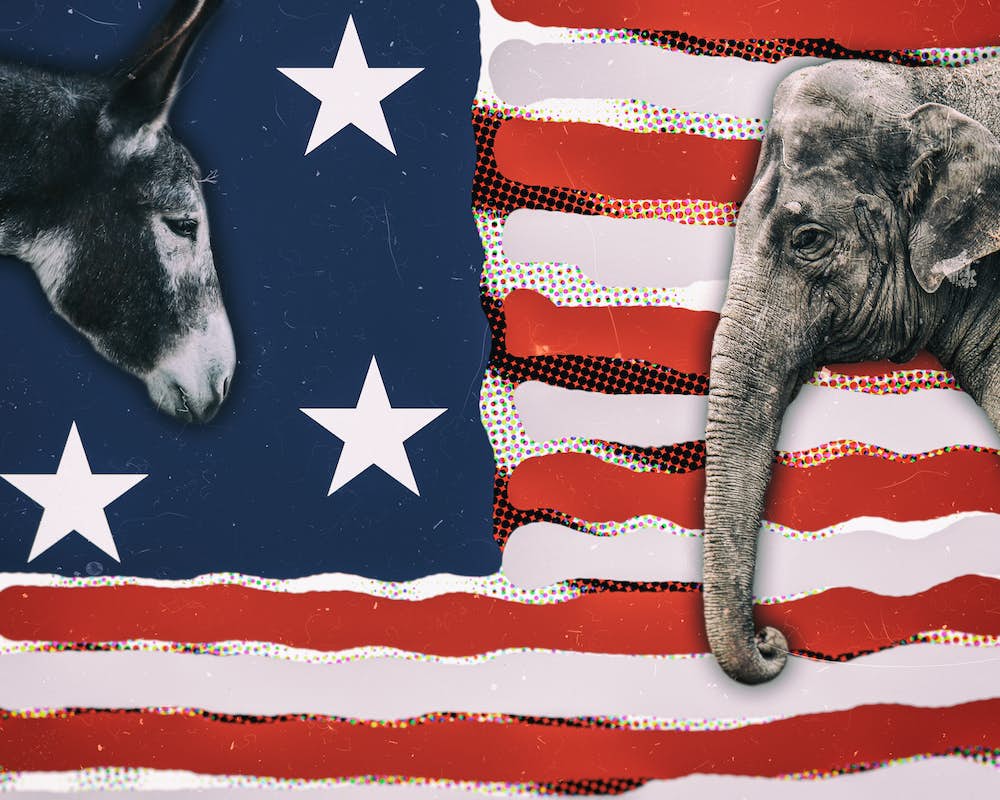 When thinking about the upcoming election, a number of clients have asked the age-old question: Who is better for my portfolio? The reality is that there is no right answer. Historically speaking, there is no strong correlation between either party benefitting the stock market more than the other, and there is no consistent pattern of incumbents being better than newcomers. As we often remind our clients: The stock market is NOT the economy. Presidential platforms, policies, and leanings can certainly have an impact on the economy, but ultimately even that influence tends to be less pronounced than hoped for or feared.

As we approach the 2020 election, there are two things that may be useful to keep in mind as you consider your personal stance on voting, the impact of taxes (which Melissa Visbal will follow up on in blog posts over the coming weeks), and the historical differences between Republicans and Democrats. To be clear, we are not advocating that anyone should vote for any particular candidate, nor should you vote on any singular issue (even something as important as the economy). All of this being said, we’re keeping a close eye on the situation from those two perspectives.

Income Tax: Biden is looking to raise individual income taxes on folks in the top bracket and intends to keep other brackets largely intact. Quite obviously, this could impact America’s upper class, but it’s not likely to cause meaningful damage to the majority of the population. Trump is looking for another middle-class tax cut – specifically reducing the 22% tax bracket to 15%. This would be meaningful for a large portion of the population and likely lend itself to additional consumer spending (good for markets) and saving/investing (good for the market).

Capital Gains Taxes: Trump has teased a capital gains tax holiday, which would spur market activity and liquidity. This would be favorable for the markets, but also seems relatively far-fetched and likely unpopular with a large portion of the population. Outside of that, he intends to leave Capital Gains Taxes as they stand. Biden wants to increase capital gains taxes (especially for high earners), which we have not seen since the early 1980s. The ultimate effect of this will be less liquidity and likely less tax-based revenue. If Biden is elected, it would be reasonable to expect an increase in gains harvesting (people selling positions that are up) in the closing months of this year as investors try to front-run a capital gains tax hike. This would, most likely, create a strong headwind for markets in November and December. However, that immediate impact would be short-lived, and capital would ultimately come back into play. Over the longer term, however, there may be a hesitation from some investors to sell positions if the capital gains tax is deemed “too high,” and this could reduce market liquidity (which is not typically a good thing).

Corporate Tax Rates: Under Trump, the corporate tax rate was cut substantially. Biden wants to increase the Corporate Income Tax Rate from 21% to 28%. This is a meaningful increase and the single biggest factor on the tax side – at least as it relates to investments. It’s easy to become concerned about individual income tax rates and capital gains tax rates, but an increase in tax liabilities to corporations will have vast, sweeping impacts on businesses as it There are many analyses that can be researched to see the impact of tax changes by the candidates, but we found this summary published by the Tax Foundation (an independent tax researcher) late last year to be quite helpful in understanding (at a grand scale) the impact of the increases proposed by Biden:

According to the Tax Foundation General Equilibrium Model, Biden’s tax plan would reduce the economy’s size by 1.47 percent in the long run. The plan would shrink the capital stock by just over 2.5 percent and reduce the overall wage rate by a little over 1 percent, leading to about 518,000 fewer full-time equivalent jobs.

This is a lot to digest, but in general, an increase in tax rates for individuals, corporations, etc., is not favorable for economic growth. The numbers above make that case.

Historically, Democrats have favored “big” government over “small,” and that theme lends itself to a number of areas:

More taxes to enforce and allow for the items above

Candidly, that trend is often hard to decipher as the general trajectory of the United States over many decades has been toward a larger, more powerful government. But from a policy standpoint, Democrats favor more government programs, more enforcement, and support for their programs, etc., and they need more revenues to pay for that.

In general, those policies have made business growth more challenging. It is harder for businesses to stay in compliance with increased regulations while also spending more money on tax bills. These things tend to hurt business owners, the stock market, and wage-earners themselves, though that adverse impact does not necessarily equate to a loss or decline (it often vests itself as decreased growth). In other words, the expected increase in regulations and taxes during a Biden Presidency should not be misconstrued as a reason why the economy will contract, or stocks will go down. But some may make the case that the economy may not grow as much as it “could,” and in turn, that could impact the stock market.

It is important to remember that just like any other issue, things chance from election cycle to election cycle. The economic situation at hand is not the same economic situation we saw in 2016. It is also important to note that no president should receive all the credit or all the blame for economic outcomes. America’s economy is a massive machine built upon decades of innovation, financial engineering, supply, and demand. No single person can steer that ship, let alone in four years. Though we like to think we have a voice in the economy by voting a certain way, that’s not quite as direct as we’d hope.

Trump has demonstrated a truly impressive economic track record, though again, he can’t be given all the credit for the state of the economy as a whole. In 2016, an economic vote for Trump was a vote for the hope that he could deliver on big promises. A disenfranchised middle class swung the election. He was a big unknown and a volatile character, to say the least, but he had big ideas, and many people liked those ideas. Though his temperament has not changed, his track record is less fanciful now that we’ve seen four years (minus COVID) of sustained economic growth. Though the current pandemic has disrupted things, it’s incredibly difficult to make a case that Trump has de-emphasized or hurt the economy. In fact, the most common criticism of Trump’s response to the pandemic has been that he’s put too much of an emphasis on re-opening and keeping businesses operational.

Further, what happened prior to the pandemic was impressive beyond just the jobs created. One particularly compelling piece of data supporting this economic strength is this – Median Usual Weekly Real Earnings. This is an inflation-adjusted number that reflects what the median person earns per week (be it in salary, hourly pay, tips, bonuses, anything). It’s a very broad number. Obama took office in the first quarter of 2009, which coincidentally was also the stock market bottom following the financial crisis. At that point, Median Weekly Real Earnings was $345 per week. His last full quarter in office (Q4 2016) showed a Median Weekly Real Earnings of $349. That was a growth rate of just 0.14% per year for the median American worker. The most recent reading on this statistic was $392. Since Trump has taken office, the average American worker has seen earnings increase by 3.72% annually. That is a meaningful economic swing, especially when many are paying less in taxes.

In fairness to both sides of the aisle, it’s hard to look at that growth and say, “Well, Trump flipped a switch and fixed everything after Obama destroyed it.” That’s just not how the economy works, though some Republicans may insist upon such a notion. That being said, it’s incredibly impressive that Trump took office after eight years of economic recovery and drove wage growth so strongly so late in the game. Trump has legs to stand on as it relates to economic promises. This is a departure from four years ago.

Another crucial difference from 2016 comes from Trump’s opponent – this time, Joe Biden, as opposed to Hillary Clinton four years ago. At least according to certain tax analysis, Hillary Clinton was a much greater threat to the economic expansion and, as an extension, the stock market than Joe Biden. The same Tax Foundation report analyzed her tax plan back in 2016 and concluded that her policies would reduce the economy’s size by 2.6%, lead to 2.1% lower wages and lead to 697,000 fewer full-time jobs. A table comparing the Tax Foundations analysis of both Clinton and Biden is below.

It is equally important to note that those “hits” from Biden (which again, are much less severe than those predicted under Hillary Clinton) would be coming off a much higher base as on a normalized (pre-COVID) basis: unemployment is lower, GDP is higher, wages are higher.

In 2016 the decision was very difficult for many – even on an economic analysis front. Clinton seemed to be a known economic quantity and an assumed negative one (if you believe the projections above). Trump was an unproven politician with big goals for the economy but no track record as a government operator and a questionable track record as a businessman. The downside of Biden in 2020 is much less severe than that of Clinton, per the projections. The upside of Trump is a bit easier to quantify now.

So What Will Happen?

Despite all the major headlines – elections, tax rates, regulations, etc. – one could argue the single most important factor for the stock market moving forward is going to be interest rates. If interest rates remain low and the Fed continues to provide liquidity to the market, it is reasonable to expect a continued and robust economic recovery (out of COVID) regardless of who wins in November. The reality is neither candidate is likely to interfere with interest rates. Further, the stock market tends to react strongly when uncertainty is removed. Right now, the largest uncertainty about the economy is the election. In an odd way, any answer is better than no answer. The good news is that at some point, we will know who won the election. The bad news is that it could take a while – even beyond November 3rd.

Melissa Visbal will be back over the coming weeks with a closer look at tax policies proposed by Joe Biden. We highly encourage you to check back for those posts and reach out to us with any questions.