Some Perspective on Recent Market Declines 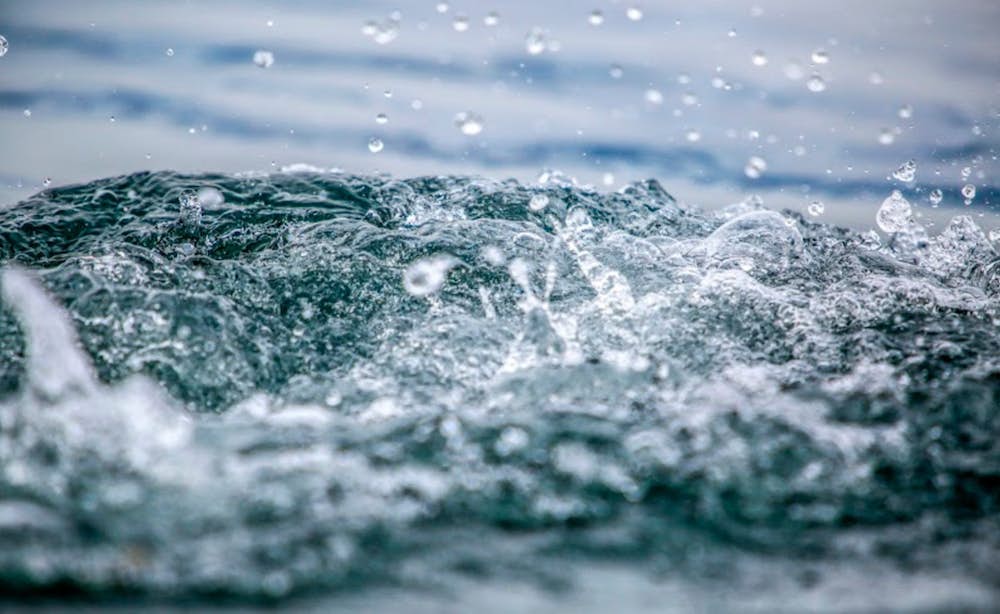 Lest we seem impervious to loss or insensitive to client account values, let me lead with this: We hate losing money. We hate down days. We hate stock market declines. Period.

With that out of the way, we're not ready to write off 2018 as some kind of lost cause or to embrace some pundits' insistence that this is the beginning of a major crash. As we observed back in 2016 (when the market was down 7.75% through its first 10 trading days and closed the year up nearly 12%), there is a danger to extrapolating short-term, early-year losses. With that in mind, here are some thoughts regarding what we actually have on our hands as of the time of publication (6:48 AM ET on Tuesday, February 6, 2018).

Yesterday (February 5th) was rough. There's no way around it. The S&P 500 closed down 4.10% on the day. The fact that the index was ever-so-briefly up around 10:30 AM makes the draw-down even more difficult to wrestle with. These losses compounded upon the already deep gash of Friday when the S&P 500 declined 2.12%. There was plenty of "news" contributing to these declines—from global fears about inflation to Janet Yellen's farewell smackdown of Wells Fargo (ticker WFC)—but there was a true sense of panic at times on Monday and we're preparing to see signs of that on Tuesday (though futures have been all over the place and not necessarily all down).

But taking a step back at times like this can be helpful to reduce undue panic. Ultimately, the moves of Friday and Monday did a lot to negate early-year gains, but we're not drowning. As you can see below, the downward spiral has been steep and direct, but this does not necessarily equate to a more lasting trend of declines. 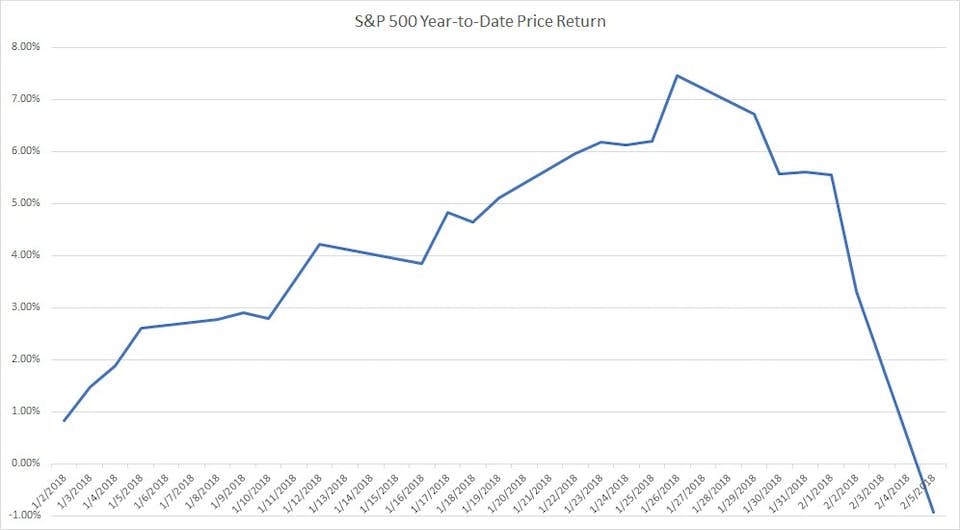 But the cumulative damage is much less devastating than it may seem. At the risk of over simplifying, here is the S&P 500's performance (year-to-date) as a single data point: 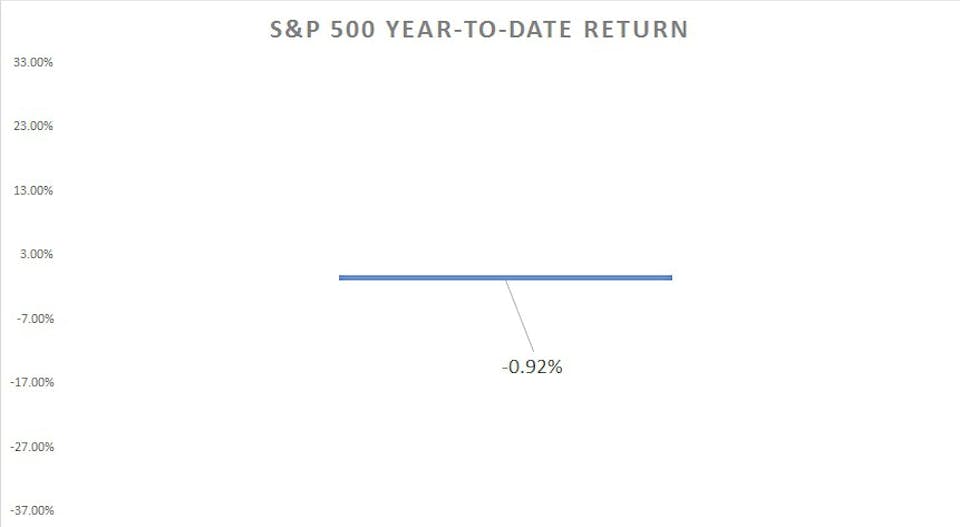 For context, the values on the Y-axis above represent large market moves over the past 10 years. The S&P 500 saw a decline of 37% in 2008 and was up more than 32% in 2013. The current year-to-date decline of 0.92% isn't all that bothersome in and of itself. More worrisome is how quickly we got there. But again, I think some perspective could be useful here.

At this point, all we know for sure is that the stock market has not kept its New Year's Resolution. It started off strong with the goal of weight loss, but then Super Bowl week arrived and reality hit. And by "reality" we mean too much beer, too many plates of nachos and too many hot wings. Quite quickly, five weeks of steady progress was wiped out. If we took the full-week returns of the market and applied them to a scenario in which a 300-pound man was trying to lose weight, here's what this year looks like. 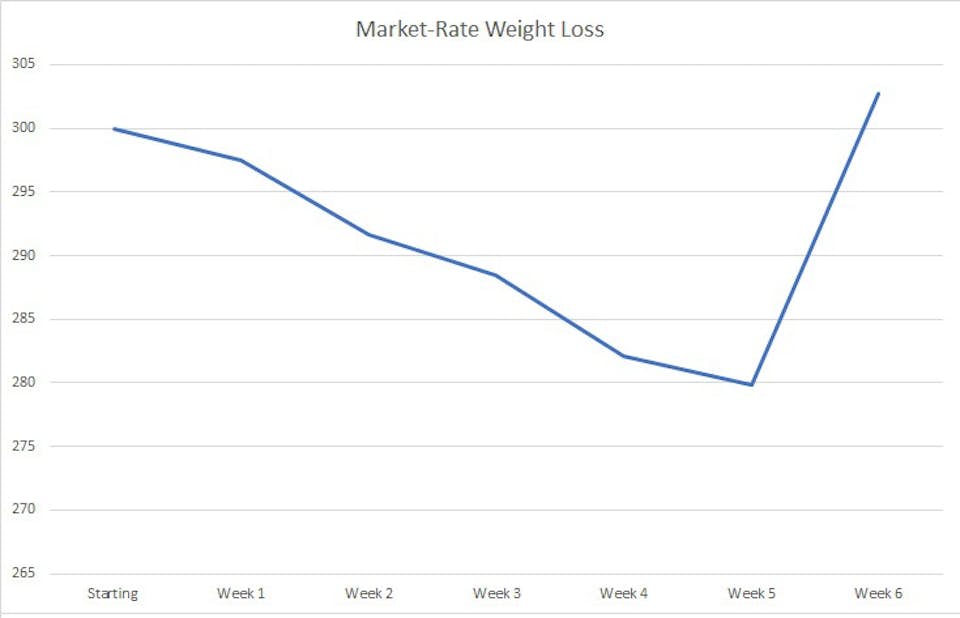 Make no mistake about it, progress was lost. But we're pretty much where we started.

As a penultimate comment, I would caution everyone to be discerning in how they read headlines. Yes, the Dow Jones Industrial Average did post the worst single-day decline in its history yesterday—on a points basis. But on a percentage basis the move wasn't nearly as cataclysmic as implied. On Monday, the Dow declined 4.6%. On October 19, 1987 (quite fittingly, the first trading day after I was born), the Dow declined 22.6%.

So how should you make sense of these declines on a points vs. percentages basis? I'd defer to percentages for historical context, but to make that point consider this. In some ways, point movements are a lot like temperature degrees. If you're outside in the summer, you may or may not immediately notice if the temperature is 98 degrees or merely 93 degrees. But a five degree swing can make all the difference in the world in cold weather—especially when there's some moisture in the air. Nobody likes a cold, rainy day. But the difference between 37 degree rain and 32 degree snow is a discernible spread that Atlantans have become all too familiar with. Like degrees, points matter more when the starting point is lower.

A Dow decline of 1,175 points was undoubtedly painful on Monday. But losing the same amount of ground (on a points basis) would have hurt much more decisively if the Dow traded at a lower level.

Lastly, as we move into today, our objective is relatively simple. We want to stay as level-headed as possible. We want to be cognizant of broader market panic and volatility, but we want to be disciplined to asset allocation targets and price targets on individual stocks. If you'd like some more in-depth analysis on our view of the economy, check out our monthly webinar. We'll likely be back later this week with more updates on the blog—in written or video form.