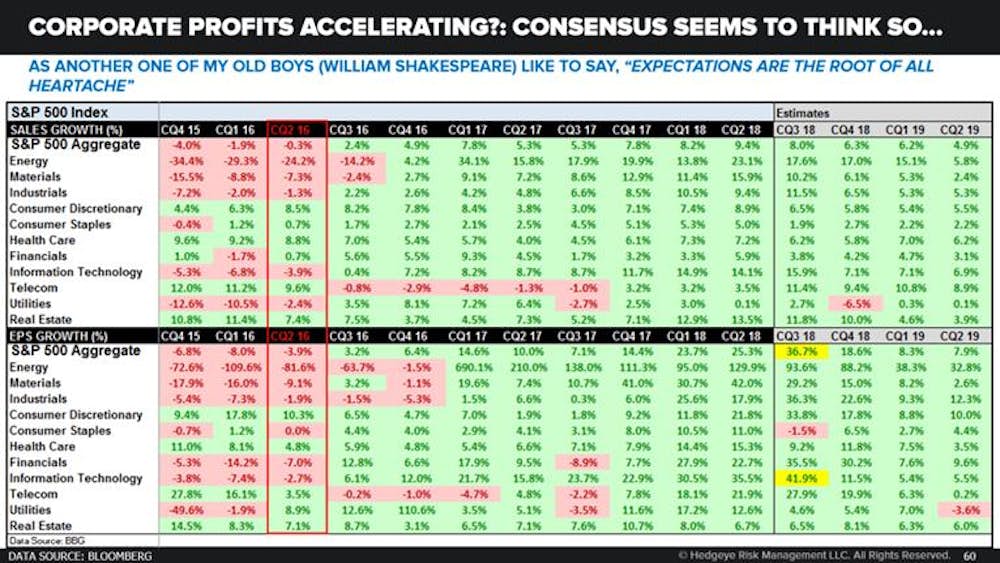 In light of the market action over the past 2 days I asked our equity analysts for a quick snapshot of their thoughts behind the downward movement in virtually every market – equity, fixed, domestic and foreign. They agreed in many areas – particularly as it related to China. But they also had other perspectives that are worth mentioning when looking at the macro picture. Here are their thoughts:

For the first time in years, investors are beginning to see cracks in the world economy and it is spooking investors. However, China’s decision to lower the reserve requirements for its banks indicates that China is finally addressing its struggles – also read as: China is admitting defeat. China can’t compete with the U.S. on a “tit-for-tat” tariff basis simply because it is a net exporter and already had many more tariffs in place than the U.S. before Trump even became president. If I had to guess, China will continue to implement expansionary policies to combat the trade war and will be forced to make a decision which may become clearer at the 2018 G20 Summit later this year. China’s options are twofold:

I believe option 2 is more likely given that the Democrats are projected to only take control of the House in the 2018 midterms and it would be extremely tough for China to hold out until the 2020 presidential election. However, in the short-term, I believe we will continue to see market volatility and at least a 10% correction that could be righted by positive earnings calls coming up for 3Q18. It will be interesting to hear what Jamie Dimon has to say on tomorrow’s earnings call given that he has been bullish on the economy but is not much a Trump supporter. It is in his best interest to be bullish on the economy, but look for subtleties that indicate whether the trade war is having a larger than expected impact on the U.S.

Next, the IMF lowered its global forecast for 2018 and 2019 growth blaming rising trade protectionism and instability in emerging markets. The IMF’s read-through logic is that global trade grew by 5.2% last year (the best year since 2010-2011), but is only on track to grow by 4.2% this year and thus concludes that the trade war is finally taking its toll. Despite this, their GDP growth forecast for 2018 for the U.S. and China was unchanged at 2.9% and 6.6%, respectively. This somewhat mutes fears of weak 3Q18 earnings and 4Q18 guidance for U.S. companies as mentioned above. The weakness in the IMF’s report came from emerging markets in the Eurozone which is now forecasted to grow GDP at 2.0% verse the previous estimate in July of 2.2%.

Finally, rising U.S. interest rates added to the recent market confusion, but I firmly believe this has nothing to do with the current market pullback. If anything, rising rates could indicate money on the sideline that will be able to “buy the dip” allowing the market to recover from its recent pullback.

In conclusion, I believe the S&P 500 still has some downside left – perhaps 5-6% to roughly $2,590. We just need some positive headlines such as earnings beats in the coming weeks to change sentiment. After all, tariffs being placed on U.S. companies is nothing new. If earnings/guidance is bad, this thing could get real choppy.

There are five things going on that are impacting markets in my opinion:

1. The China slowdown is appearing more intense than I had initially thought (e.g. monthly auto sales down 15% there). I believe that the government will come to the rescue but this may come in the form of a devaluation. Already, the yuan has depreciated 10% in the last three months alone and I think burning the currency is the best way the Chinese will be able to combat the tariff threat politically. As a result, while China may be able to stem the tide in nominal dollars, I think things may continue to be difficult for western companies doing business in or with China (affecting consumer companies like Starbucks, General Motors and Procter & Gamble and industrial companies like United Technologies).

2. The pent-up demand in durable goods appears to be waning. See the weakness in housing-related stocks (e.g. DHI), monthly auto sales numbers and Fastenal’s report out yesterday morning. In autos, leasing terms are getting increasingly easy. A worker in the leasing offices at Honda told me that charge-off rates are running materially higher than the models indicated (and these are for vintages from 1-2 years ago…so just wait until the current vintages mature).

3. Semiconductor capex is being deferred and the market is shooting first and asking questions later. I believe that this is primarily related to capital spending and less a function of end demand. However, I am in the minority here.

4. From a technical perspective, I think tech is correcting but not crashing. These are valuation-based corrections and I think the trading is more emotional than fundamental in names like MSFT, AMZN and others.

5. Finally, I think the market is coming to the realization that grow is beginning to slow. Take a look at current EPS and Sales estimates going into the future (especially in tech), courtesy of Hedgeye Risk Management. You can see material deceleration. This is not decline and therefore not recessionary, but it does provide the excuse for a correction. Q3 is expected to be the peak for growth in a number of industries. 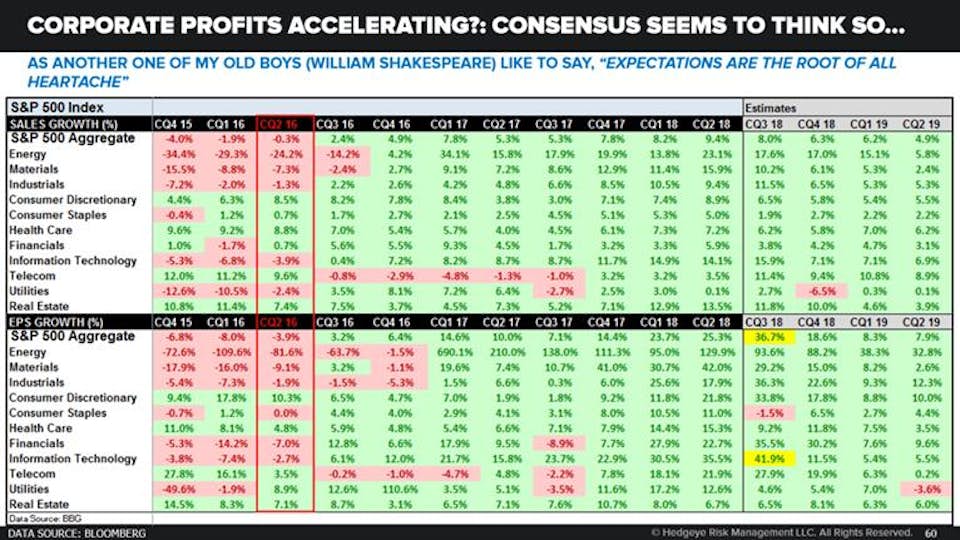 (The market is moving down because ….)

Tariffs all around are causing higher prices (seen almost across the board from reporting companies earnings) thus causing Fed to raise rates relatively quickly, which is rarely positive for stocks

This huge downward movement in the foreign markets would indicate either an overreaction to these factors (unlikely) specifically in the emerging markets or the floor for the US market is much lower than the current level, and there is more selling ahead.