GDP is negative? Should I sell everything? 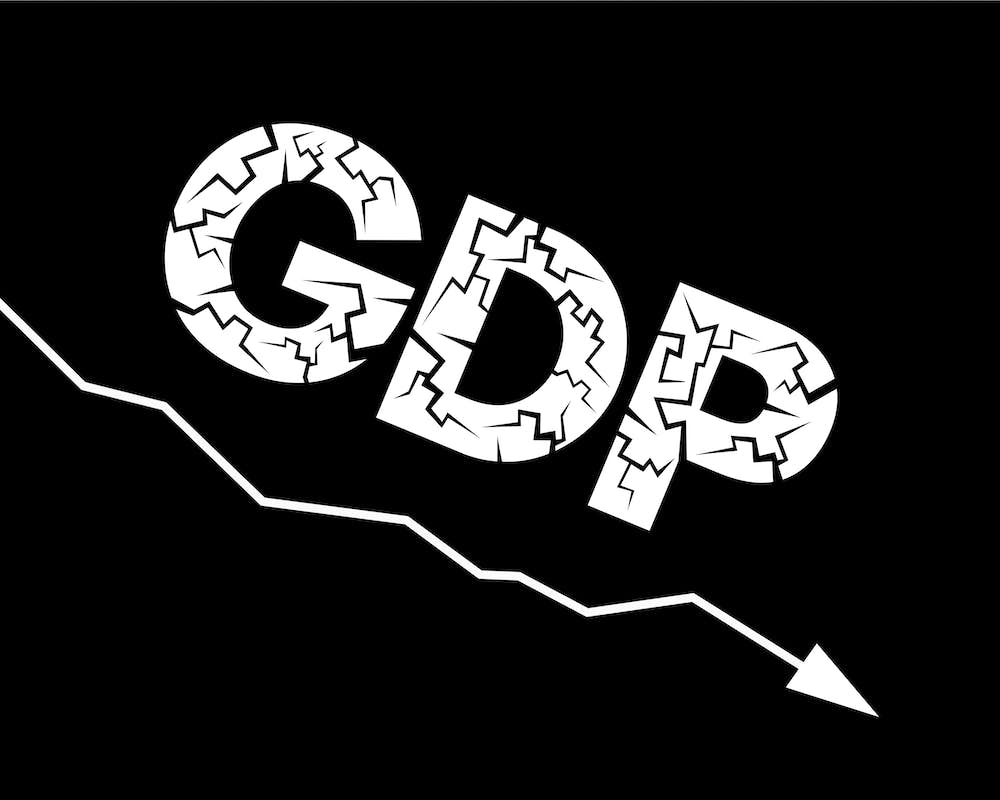 This morning, the Bureau of Economic Analysis (BEA) reported GDP growth for the first quarter of 2022. This is a measure of the growth in total economic production in Q1 relative to prior periods. There are a number of ways in which this number is reported. The one that gets the most headlines is growth in the economy over the prior quarter (Q4), adjusted for seasonality and annualized.

After posting a +6.9% annualized growth number in Q4, the BEA this morning reported that GDP actually fell at an annual rate of -1.4% in the first quarter. This raises understandable concerns: If the economy is in decline, should I just sell everything and go to cash? In our view, that conclusion would be a big jump for the following reasons: 1) backward-looking data, 2) recessions are not created equal, and 3) there are some nuances this time around that give us more confidence than in past cycles.

We are looking at data that, at the very newest, is a month old and, at the oldest, is already 4 months old. Markets are discounting mechanisms, which means that they should price in future information, not past information. For instance, the year the Tax Cuts and Jobs Act went into effect, S&P 500 earnings rose from $125.60 to $150.60. However, the market return for the year was actually negative -4.4%. Knowing what has happened in the economy is not often a good indicator of what will happen in the markets.

Of course, if the pattern continues or deteriorates further, this could spell more weakness for stock markets. But the point here is that the future doesn’t change based on what just happened or what the BEA just reported for Q1 economic growth.

2. Recessions are not created equal.

Recession is a scary word. People do not like hearing it because of what it implies for their income, their home value, their job security, and simply how they feel about their lives. From an economic perspective, we do not want recession but we also understand that it would be foolish to assume that one could go through a 40-year career or life of investments in which a recession doesn’t take place. Recessions, like the winter season, are a fact of life. Also, like the seasons, some winters have terrible weather with winter storms and freezing cold temperatures. Other winters are mild by comparison. Maybe the kids have to stay home from school for a few hours out of caution for freezing hazards but the season otherwise comes and goes.

The same is true of recessions. Given our experience with recent recessions (2020 and 2008), it is understandable to think that a recession is a climactic event full of bankruptcies and economic catastrophe. However, this isn’t always the case. In Narwhal’s experience with recessions, we’ve found that areas of excess often have the most room to fall and heavily indebted entities are the most likely to suffer devastation. In 2008, this characterized the entire financial system. In 2020, struggling brick-and-mortar retailers, many of whom were heavily levered with debt, shut their doors. Airlines, keen on expanding capacity and many with cheap aircraft financing, found themselves unable to service their debts.

Today, the area of excess appears to mostly reside among companies that enjoyed tremendous growth during the COVID-induced stay-at-home environment. Companies like Teledoc (TDOC), Netflix (NFLX), and Peloton (PTON) have fallen dramatically from their highs. Even Meta (FB), formerly Facebook, has seen its growth decelerate substantially. In the case of FB, growth had been trending in the low-to-mid 20% range pre-pandemic. COVID changed all that as FB’s position in direct-response advertising positioned it highly attractively to advertisers looking to sell their apps or products over Instagram or Facebook. Facebook grew revenue by 37% in 2021 as a result. Last night, FB announced to the market that it only grew revenue by 7% in Q1 and expects to be roughly flat in Q2. This looks bad, but if one smooths out the growth with last year, we are still looking at annual growth in the mid-20% range. FB is well-capitalized, has excess cash, and the shares are actually higher this morning after management signaled last night that Q2 would be the trough in revenue growth.

The bottom line: this recession in economic growth does not have the systemic characteristics and debt overhang that prior recessions may have had, leading us to believe that the depth of this recession may be shallower and the long-term repercussions less severe.

3. Nuances suggest underlying economic growth is not as bad as the headlines.

The headline in the economic data shows a 1.4% annualized contraction in the economy. 3.2 percentage points of this number is attributable to a decline in net exports; essentially, we imported much more in Q1 and exported much less. Personal consumption was reasonably consistent with Q4 (+2.7% from +2.5%) and business fixed investment actually accelerated nicely (+9.2% from +2.9%) even while inventories fell.

Moreover, Visa, a company with its ear very much to the ground in terms of consumer spending, provided its quarterly update to the market on Tuesday. They delivered revenue growth of 26% (driven by travel spending) and raised guidance for the full year, despite a currency headwind and the loss of its Russia business due to the war in Ukraine. Not a management team known for its hard-headedness, the company was clear that momentum has continued throughout Q1 and into April:

In terms of the big picture, after a short four to five week impact of Omicron in December and January in the US and many other parts of the world, the recovery continues to be robust. At this stage in terms of volume, we have seen no noticeable impact due to inflation, supply chain issues or the war in Ukraine.

At the end of the day, we need to pay attention to the GDP headlines, but skating to where the puck was rather than where it is going is not a strategy that tends to yield much success. Indeed, over the past few months, talk and fear about recession has risen and risen. Now that it is here (we’ve had an economic pullback, whatever the term) and the market is down 11.6% for the year, maybe it’s not quite as bad as recession fears often lead us to believe. According to Facebook’s report, we might have a bit more economic softness in Q2, especially if the Fed keeps its foot firmly planted on the brake. But, consumers and companies have the cash to weather the storm and the recession is likely not to be a severe as the last two we’ve endured. Indeed, it may be nice to finally take the medicine and get it behind us.

For what it’s worth, the market appeared to shrug off the noise of the weak GDP report this morning and the S&P 500 is actually up slightly on the day as I type.